Dr Brett Halliday is a Queensland trained orthopaedic surgeon. He graduated from the University of Queensland in 1988. He received his FRACS (Orth) in 1997, becoming a full fellow of the Australian Orthopaedic Association (FAOrthA) in 2002.

Since finishing his training as an orthopaedic surgeon in Queensland, Dr Halliday has been employed as a Deputy Director of Orthopaedic Surgery at the Royal Brisbane Hospital for twelve months, specialising in joint replacement and trauma management. He then completed additional training in joint replacement and trauma at Royal Devon and Exeter Hospital in the UK before returning to Australia to take up the position of the Director of Orthopaedic Surgery in January of 2000.

In 2002 he completed his ABIME accreditation and is a certified independent medical examiner.

Dr Halliday is an active participant in post graduate medical education. He is involved with the training of medical students, resident medical officers, and was the supervisor of orthopaedic registrar training at the Royal Brisbane Hospital and a member of the Australian Orthopaedic Association Training Committee for the Queensland Branch. He is also a member of the Australian Orthopaedic Association State Committee, Queensland Branch.

In the past he has been a member of the Road Trauma Committee of Queensland (a branch of the Royal Australiasian College of Surgeons 2000-5), and a member of the Medical Advisory Committee at the Holy Spirit Northside Hospital from 2003 to 2005. 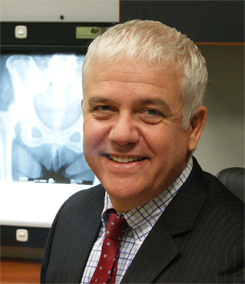